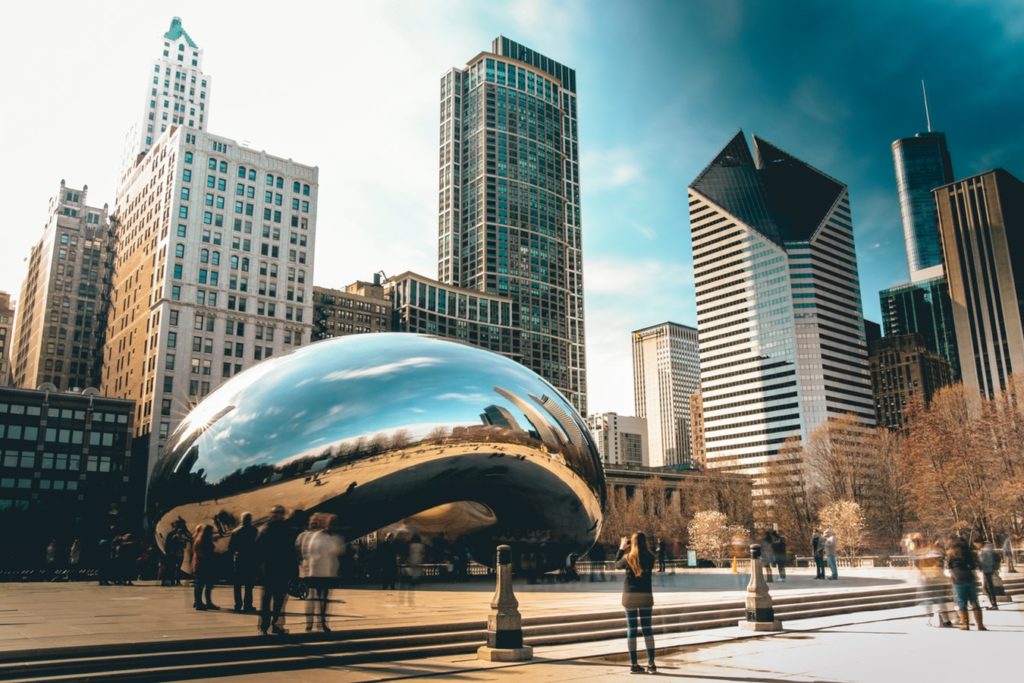 A take on Retail in Chicago by Sammi Burden, Creative Director

What brings people to Chicago when New York is a mere 45 minute plane ride away?

In our case it was this year’s Global shop held in McCormick Place which is the largest convention centre in North America. It consists of four interconnected buildings and one indoor arena sited on and near the shore of Lake Michigan, about 4 km south of downtown Chicago.

The largest city of the American Midwest, Chicago, Illinois, was founded in 1830. Established as a water transit hub, the city evolved into an industrial metropolis, processing and transporting the raw materials of its vast land. In the late 1800s Chicago grew as a national retail centre and produced a crop of brand-name business tycoons, including Philip Armour, George Pullman, Potter Palmer and Marshall Field. In 1885 Chicago gave the world its first skyscraper, the ten story Home Insurance Building. In later years architects Louis Sullivan, Mies van der Rohe, Frank Gehry, Walter Gropius and Anish Kapoor’s famous “bean” in Millennium Park were added to the city’s growing skyline and further enhanced tourism.We visited an abundance of stores, from the sickly smelling Nutella cafe with its sculptural wave ceiling to the bolt hole bright red urban infill store wedged between two architectural giants. Home to thousands of dollars’ worth of designer goods, a metropolis of colour, texture and bling, this out of context type building we saw on several occasions whilst walking the city. There was a real inconsistency of architecture which added to the quirky nature of the place. Old meets new, dull meets bold.

Most of Chicago’s retail sector has remained under intense pressure over the past year from early 2017 until now. As consumers have turned in ever growing numbers to the internet for their purchases in a whole slew of retail categories, brick-and-mortar stores in Chicago are taking a hit. But more than the change in shopping habits has affected Chicago retail over the past year. Soaring property taxes, crime, a diminishing population in the city and of course the weather, among other factors, are also causing retail to suffer in Chicago.

North Michigan Avenue, the epicentre of the city’s retail world, has not seen an explosion of new stores in the past year like neighbouring New York, but certainly the biggest change on the city’s premier shopping boulevard was Apple’s move in October 2017 to a striking new and significantly larger glass enclosed structure adjacent to the Chicago River and opposite the iconic Wrigley Building. Apple’s new building was supposed to be an architectural hub, but it quickly became a problem for unsuspecting birds that crashed into the building’s all-glass facade and perished. They have also suffered problems with the large scale architectural glazing with cracks appearing.

Work is still underway well into 2018 to understand the issues and how to overcome them. Aside from a slight shift in the aesthetics of the store there was a huge emphasis on education and clawing back the student demographic who for one can’t afford the product, two find other providers more superior and three get lost in the software. Apple are investing heavily on the education sector and with their new “today at” campaign it allows people to use the Apple facility to learn, search, engage and be part of the growing Apple community. A real positive for this growing tech savvy market.

Lush, the cosmetics company, also moved to slightly larger premises along North Michigan Avenue after having been housed for years inside the Macy’s store at Water Tower Place. Its prominent location and iconic smells enticing shoppers in. I’m sure the brand will continue to thrive in its new location.

In an apparent sign of the desperation at shopping malls in Chicago and elsewhere, the 900 N. Michigan Avenue indoor shopping mall underwent a complete makeover, including new ceiling with video panels showing spiralling flowers with a brighter, airier look overall. Will it be enough to pull in shoppers? Time will tell but it certainly grabbed my attention enough to take some snaps.
On the grocery store front, the big news was Amazon’s takeover of Whole Foods market, a move that is expected over time to have huge repercussions for the entire grocery store business. Amazon moved in and initially lowered prices at WFM. Now other changes are starting to happen. Amazon kiosks are popping up inside WFM outlets in Chicago where consumers can see and find out about a range of eco-friendly products that are popular on Amazon and you will also be able to collect Amazon ordered products here too. All in all an added customer experience that connects the brands even though they do feel very disconnected. I wonder if there is a better way of combining these two services. The health conscious with the internet shopper. Doesn’t quite work.

A real interest for us was the Amazon bookshop in Chicago’s Lakeview neighbourhood, giving customers a chance to test the e-commerce giant’s take on offline shopping was great for us Brits who have yet to see this manifest across the pond. Amazon first opened its online bookstore 22 years ago and has grown to be the giant we all know and love. Its first bricks and motor store opened in Seattle in late 2015 and there are plans to open more throughout the country in 2018. In comparison to walking into a traditional bookstore, where the first rack you see is usually stocked with newly released hardcovers, at Amazon Books the first table holds titles that earned customer ratings of 4.8 stars (out of five) or better, whether or not they’re new or likely best-sellers. Every book is displayed with its cover facing out and a small card underneath listing its Amazon rating and, usually, a customer review which added to the emotive connection and definitely enticed you to want to buy more. Amazon app users can scan covers with their phone to pull up more details or purchase online. And a sizable portion of the 6,000 square foot store’s centre is devoted to Amazon’s devices, including Kindles, Fire tablets and TVs and the Echo smart speakers with an abundance of information provided by smiling staff that quietly hover until you are ready to chat.

The Chicago store stocks only about 4000 titles, compared with the untold number available online. We found familiar sections, like biographies and graphic novels, but we also browsed displays showing books that are popular with Chicago Amazon shoppers, books that frequently show up on kids’ Amazon wish lists and page turners and also books Kindle users sped through in three days or less, again prompting a reaction “this must be worth a read”. The Lakeview store is also the second bookstore with a coffee shop, and plenty of people were present, quietly reading and searching the web. I could have stayed here for hours.

In general retail stores here are a carbon copy of any big city with the added benefit of less footfall than New York and a seemingly chilled out vibe, but with the growing popularity of Chicago’s west loop with retail luxury healthcare brand Aesop now residing two blocks from the Ace hotel and its trendy crowd, surfing the net and sipping endless Macchiato this contemporary urban hub felt like it was on the verge of something Shoreditch like. Soho House was of course in this neck of the woods too. Aesop was a perfectly hidden gem or in this case emerald, this new concept store designed by renowned architect Frida Escobedo is made up of beautifully glossy dark green simplified  metal unitary creating a backdrop for the strategically placed premium product dimly lit and completely calming. Frida has worked with Aesop on other location stores and all have been developed with the design intended to reference the heritage of their locations informed by a deep connection to the specifics of site, setting, and place.

Chicago offers a diverse mix of culture, art, sculpture, retail, food galore and a real sense of Chicagoan community that is typical of Midwestern cities.

Ready to discuss a project?

It all starts with a chat.

Ready for your next move?

Send us your CV or portfolio.